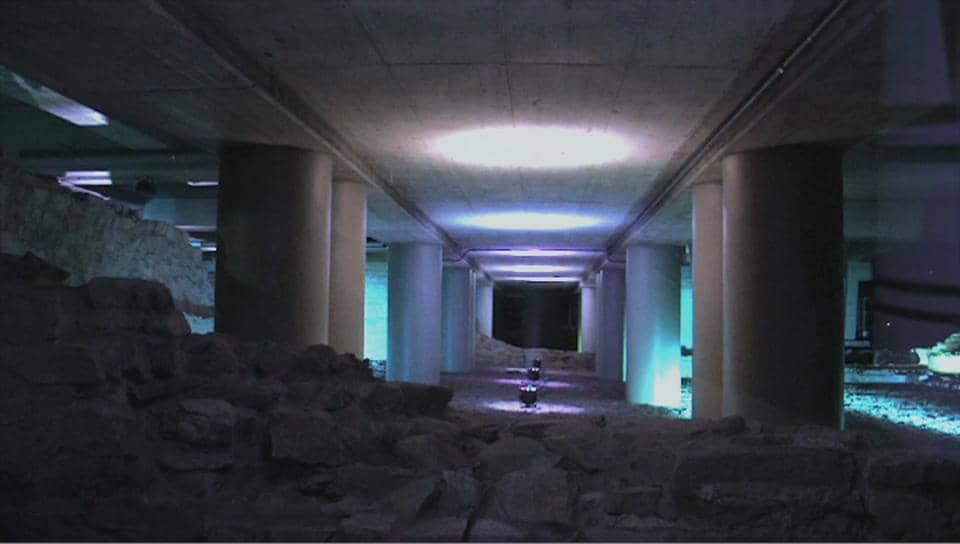 In 2011 I was commissioned a new work to be installed in the ancient Roman remains of the thermae in Como. The baths, dating back to the first centuries after Christ, dismissed after the III century and later also used as burial site, are ca. 1500 square meters wide and were discovered in 1971 . In the beginning of the third millennium a parking lot was built above the archeological finds, protecting them from precipitations and at the same time trying to make them visible by people accessing the parking lot.

However, the bottom floor which hosts the remains is scarcely open to the public, and the festival yielded to an agreement with the authorities to open the path which leads the audience through the ruins.

At that time I was working extensively with texts by the Argentinian writer Jorge Luis Borges (1899-1986), on which I based a number of pieces and audiovisual works. In this case I chose The garden of forking paths, a short story included in Fictions, as a starting point for the development of my work. In this text Borges describes a multi-layered reality, where time is considered as a ramification in different dimensions of the future. Such a stratification of temporal layers was particularly fitting for my reasoning on-site, while I was analyzing the space in order to imagine what I could have been installing there: in fact, I was overwhelmed by the evident clash of the parking lot elements against the ancient stones of the Roman bath. Such striking signs of two different eras co-existed hic et nunc, at the same time. Therefore I decided to use a symbolic set of sounds, using samples of metronomes and clocks as the only sound sources for the audio part of the installation. The idea was to use them in order to represent different conceptions of time. A first, elementary concept was that of an absolute time, represented by a regular pulsation of the clocks. This pulse may vary, generating different layers of speed, and constituted, in my intentions, different perceptions of the same abstract time (as we experience when we are in different emotional states: excited/bored, happy/sad, nervous/relaxed and so on). If many clocks are pulsating in unison, and then they slightly go out of phase, we experience a gradual transition from a homorhythmic to a polymetric situation (the “forking clocks”, which gave title to the work). If those clocks are of an elevated number, the process of going out of phase will generate a granular, almost continuous sound – let’s say, having more than 16-20 percussive sounds spread in one second, means to trespass the threshold for audition of pitch. This is the bridge which connected the material with those continuous sounds representing the eternal time, the one we can just try to imagine, but not experience: an infinite reverberation was applied to the clock and metronome samples, in order to obtain sounds of indefinite duration; in other words, traces of an instant spread throughout the eternity.

I did not build a fixed version of the piece. I instead programmed a Max/MSP patch which was capable of creating musical sections according to certain rules. Each section had a dominant character and the computer itself was deciding – stochastically – how long the sections was, and which section to play next based on the content of the previous one. In this manner I could reach a sort of hypertextual form, resembling the structure of Borges’ short story.

In the domain of light, I decided to work on the movement of light beams. While still keeping the colors homogeneous I made minimal experiments introducing some variants. I divided 35 light fixtures into four groups, matched with four “voices” in the Max/MSP audio patch, and I placed them in four key-spots crossing the path of the visitors. The disposition of three of the four light clusters (one of the groups was placed right under the horizontal, circular glass windows of a corridor suspended on the ruins) was imagined in a way that, if lit at the same time, the direction of the beams would be coplanar (i. e. residing within the same plane) but originating from the same point, radiating as spokes of a wheel.

The core of the animation was the subsequent switching on and off of the fixtures, controlled via DMX: a sine-wave shaped oscillation triggered light bursts one after another in the different lamps, giving the impression of a mechanical metronome, or of a pendulum, measuring time. The central position of this movement was synced to the clock and metronome sounds, so that the four lighting groups and the four sound voices were deeply interdependent, an attempt at creating a shared identity. Of course, since everything was controlled via computer software, I could manipulate the light material as if it was sound: accelerating at the maximum the oscillatory movement made it possible to make the eye lose the connection with the movement itself, which became a rapidly flashing light that could easily be driven into a static light beam, in a similar way as how the percussive sound could become a granular texture and then transform into a continuous sound. Once the sound became continuous, I felt the liberty to swap the dimensions of the light animation and mapped the degree of brightness of the lamps to the frequency slices of an FFT applied to the continuous, reverberated sounds. At this moment, the lamps of the same group were not anymore in the domain of space, but in that of frequency.